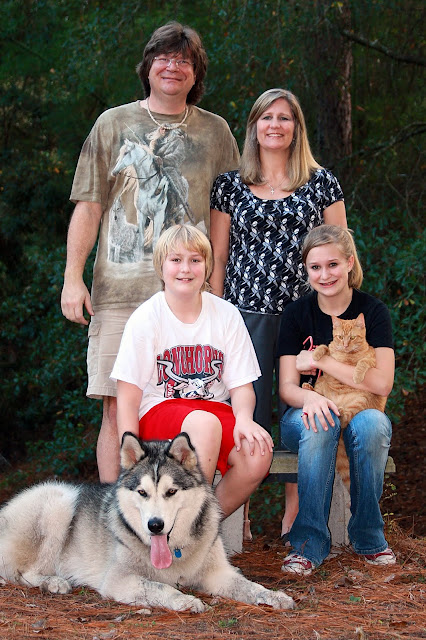 Schieler History
Long ago in a galaxy far, far away called Florida, God saw fit to remove the “she’s the yucky best friend of my baby sister” scales from Stu’s eyes and caused him to see Lory.  Lory was the eldest daughter of the PCA Worship Leader at their church in Miami, Florida.  A wise organist consistently put the two together singing weddings and the romance finally wore off on Stu.  Their first date was to a supposed church youth movie night to see Cinderella. (Yes, at one time the Disney classics were shown in real theaters).  Lory said that she would attend and then asked who was going.  Stu’s reply was, “you…and me.”  From then on, it’s continued to be you and me.

Now the you and me happily includes a lovely daughter Jessie (14 going on 15) and a dashing son Tel (13).  The Schieler family also includes a 120 lb Malamute named Denali and a rescued orange cat named Toby.  Since Stu and Lory grew up in Miami, they adore the Miami Hurricanes and the Miami Dolphins.  Tel continues the Hurricane fascination but Jessie ventures out to include FSU (from band camp) or her new favorite -- Auburn.  This family loves football!

The Schielers love to primitive camp.  They take the tent, the guitar, the lanterns, the dog, and the canoe and they are all set.  A cooler filled with all sorts of camping delicacies is a necessity but other than that, it’s pretty much just God and the open sky.  We look forward to returning to the Big South Fork in KY.  Our children have never camped there and it’s incredibly beautiful!

Two years ago, the extended family went on a 2 week trip to Alaska.  It was life-changing for all of the Schielers!  God’s magnificent artistry in Denali National Park is unrivaled.  Tel almost stayed in the wilderness.  We dream of going back some day…to visit of course!  We plan on living in Decatur forever Lord-willing!

Apart from Christ, the Schieler family agrees that music is God’s greatest gift to us!  Jessie sings soprano and loves to play her flute.  Tel sings a perfect alto right now and enjoys playing his trumpet.  Lory sings alto, soprano II, or whatever crazy part Stu hears in his head that is missing from the chord. :>)  Stu sings Baritone, Bass,  and some parts that are only heard in his musical world!  Stu loves to play his guitar and also plays trumpet.  BEWARE – You have been warned—Stu’s love of praising the Lord through music is a joy he feels that EVERYONE should experience firsthand…. Even if the only one in your family with a musical bone is your great aunt Irma, Stu will think that there is a place for you in DPC’s music ministry.  He can get very creative and he fully believes that God’s ability to decipher joyful noises is much greater than ours!

Schieler Fun Facts:
Stu’s birthplace:  Ripon, WI   (moved to FL when he was 8)

Jessie’s birthplace:  Nashville, TN   (moved to FL when she was 1 month old)

Stu & Lory have been married for 22 years this fall!  They started out in Miami, FL then moved to Divide, CO, then to Nashville, TN, then to Tampa, FL (almost 15 years) and now to paradise-- Decatur, Alabama!

Schieler Testimonies:
The Lord saw fit to call each of us to Himself when we were all children.  Lory, Jessie & Tel remember clear experiences…Lory was in her 3rd grade SS class outside and Tel was in his bunk bed as Mom and Dad were tucking him in.  Jessie remembers having prayers by herself as a first grader asking Jesus to come into her heart. Stu can’t remember a single clear event but he experienced Christ in a personal way at an early age and doesn’t have any recollection of being without Christ.  We give God the glory, praise to the Son, and honor to the Holy Spirit!

We can’t wait to worship regularly with you!  There’s nothing better on earth!  We’re thankful that God will allow us to worship in heaven too!

Email ThisBlogThis!Share to TwitterShare to FacebookShare to Pinterest
Labels: DPC