King Jesus -- this mysterious but compelling figure who stands in the center of history -- is calling out to us:  "Come to me... Follow me."

As one of my seminary professors use to say, there are generally three kinds of responses among those who would call themselves "Christians."

There might be some over-simplification in the categories above and the examples used may offend some folks, but in general, when the call to live sacrificially for the glory of King Jesus reaches the ears of those who claim the name "Christian," there are three ways of responding.

Some yawn.  They continue to trivialize themselves.  In the end, this kind of response simply can't bear the weight of human dignity -- the dignity that God intended us to inhabit.  It's self-destructive.

Others withdraw in fear.  They have no category for living sacrificially for the glory of King Jesus.  In the end they usually just stop paying attention to that kind of talk, even when someone reads it to them out of the Bible.  They ignore it & keep keeping on with the way life is supposed to go. 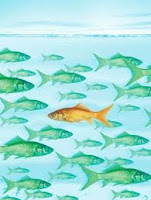 Others hear the call of Christ and their hearts are stirred to greater dedication.  They see that Jesus bore his cross for them; they stand ready to bear their cross for Jesus.  This is the way of following Christ... and they will not shrink back from the life of faith... and one day they will receive all that is promised (Hebrews 10.35-39).
Posted by Tommy Lee at 9:04 AM