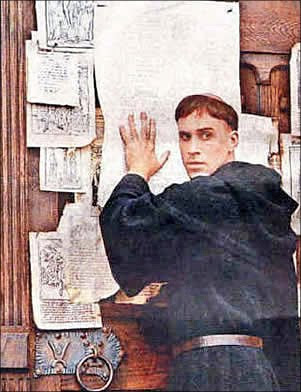 On October 31, 1517 a monk named Martin Luther nailed 95 Theses (or arguments) to the door of the Castle Church in Wittenburg, Germany.

The next day (November 1) was going to be "All Saints Day" & the pope had decreed that all visitors to the Castle Church on All Saints Day who venerated the relics and gave a contribution could reduce their time in purgatory by over one million years.

(The Castle Church housed more than 17,000 relics -- the largest collection in Germany.  Among the relics they claimed to have were four strands of hair from the Virgin Mary, a piece of straw from the baby Jesus' manger, a nail from the cross, and a piece of bread from the Last Supper.)

Luther himself use to believe that veneration of relics & these kinds of financial contributions to the church (usually in the form of buying indulgences) was of some great spiritual value -- earning him salvation.  But the Lord had now graciously brought Luther out of this darkness of superstition & empty works. The Lord had brought this man to the light of a living faith in Jesus Christ.

This is the date usually given for the beginning of the Protestant Reformation.

The breakthrough to Luther's "discovery" of the gospel probably began two years earlier when Luther was lecturing on the Apostle Paul's epistle to the Romans.

Romans 1.17 speaks of the gospel (literally "good news") of Jesus Christ as a revelation of the "righteousness" or "justice" of God... but that was precisely what Luther found to be so unbearable about God!  How is the "righteous justice" of God (which Luther had been taught to understand as the punishment of sinners) "good news?"

After a long & bitter struggle, Luther came to a rather surprising answer...

In his own words:  "I greatly longed to understand Paul's Epistle to the Romans and nothing stood in the way but that one expression, 'the justice of God,' because I took it to mean that justice whereby God is just and deals justly in punishing the unjust.  My situation was that, although an impeccable monk, I stood before God as a sinner troubled in conscience, and I had no confidence that my merit would assuage him.  Therefore I did not love a just and angry God, but rather hated and murmured against him. Yet I clung to the dear Paul and had a great yearning to know what he meant.

"Night and day I pondered until I saw the connection between the justice of God and the statement that 'the just shall live by his faith.'  Then I grasped that the justice of God is that righteousness by which through grace and sheer mercy God justifies us through faith.  Thereupon I felt myself reborn and to have gone through open doors into paradise.  The whole of Scripture took on a new meaning, and whereas before the 'justice of God' had filled me with hate, now it became to me inexpressibly sweet in greater love.  This passage of Paul became to me a gate to heaven....

"If you have a true faith that Christ in your Savior, then at once you have a gracious God, for faith leads you in and opens up God's heart and will, that you should see pure grace and overflowing love.  This it is to behold God in faith that you should look upon his fatherly, friendly heart, in which there is no anger nor ungraciousness.  He who sees God as angry does not see him rightly but looks only on a curtain, as if a dark cloud had been drawn across his face."