The Seeds of These United States of America 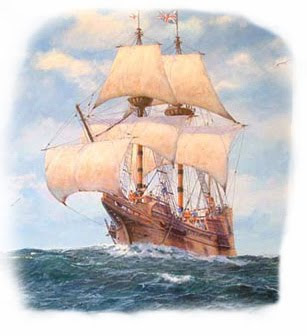 Place: Aboard the Mayflower, anchored off the coast of Cape Cod

Problem: They had made arrangements with the Virginia Company to settle just south of the Hudson River, within the northernmost boundary of the Virginia Colony. But fierce winds blew their ship off course... to the north... to Cape Cod. They decide to settle in Cape Cod, but here they are on their own -- not under the jurisdiction of the Virginia Company. Some of those on ship (non-Pilgrim bonded servants & contracted labor) see this as an opportunity to rebel. The Pilgrim leadership see that they must act quickly to prevent a mutiny.

Solution: The Pilgrims write up The Mayflower Compact...

In the name of God, Amen. We whose names are underwritten, the loyal subjects of our dread Sovereign Lord King James by the grace of God, of Great Britain, France, Ireland, king, Defender of the Faith, etc.


Having undertaken, for the glory of God and the advancement of the Christian Faith and honor of our King and country, a voyage to plant the first colony in the northern parts of Virginia, do by these presents solemnly and mutually in the presence of God and one another, covenant and combine ourselves together into a civil body politic, for our better ordering and preservation and furtherance of the ends aforesaid, and by virtue hereof to enact, constitute and frame such just and equal laws, ordinances, acts, constitutions and offices from time to time, as shall be thought most meet and convenient for the general good of the colony. Unto which we promise all due submission and obedience. In witness whereof we have hereunder subscribed our names at Cape Cod, the 11th of November, in the year of the reign of our Sovereign King James of England.... Anno Domini 1620.

This was the first time in recorded history that free people covenanted together to form a civil government with the authority to enact laws that those same people who formed the government promised to obey.

Thankful Pilgrims: Before leaving Europe, the Pilgrims had knelt on the dock and prayed for God's blessings on their voyage. And now... "Being thus arrived in a good harbor and brought safe to land, they fell upon their knees and blessed the God of heaven." So wrote William Bradford.

The Rest of the Story: During their first winter 47 people died... including 13 of the 18 women. Only three families were left intact. But these humble Christians became the seed of what would become these United States of America.
Posted by Tommy Lee at 6:25 AM