Voting as an Act of Obedience & Wisdom 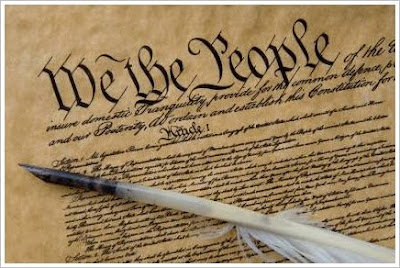 "No nation can say, 'We are the people of God,' in the sense that Israel could say it in the Old Testament.  Today, God plans to bless the world through the church, which is a spiritual nation scattered through the political nations of the world and representing the gospel of the grace of Jesus Christ wherever it goes.  The church is not a political organization, but Christians have the right to be political people.  In a democracy, every citizen has the right to enter the political arena and shed all the truth and light they can.  To do so is an act of obedience to the Lord.  In a democracy, we submit to our leaders, in part by adopting their system.  So to vote and write letters to our leaders is both a privilege and a duty.  Our leaders bid us to vote and Paul says we should submit to them.  Indeed, if we have wisdom and opportunity to make it public, failure to do so is not just a failure of duty, it is a waste."


"We the People  of the United States, in Order to form a more perfect Union, establish Justice, insure domestic Tranquility, provide for the common defence, promote the general Welfare, and secure the Blessings of Liberty to ourselves and our Posterity, do ordain and establish this Constitution for the United States of America.

Article I
Section 1
All legislative Powers herein granted shall be vested in a Congress of the United States, which shall consist of a Senate and House of Representatives.

Section 2
1:  The House of Representatives shall be composed of Members chosen every second Year by the People of the several States, and the Electors in each State shall have the Qualifications requisite for Electors of the most numerous Branch of the State Legislature.

Etc."
-- The United States Constitution
Posted by Tommy Lee at 9:03 AM