The Faith of Children 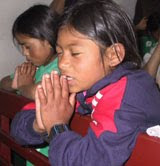 "I will say broadly that I have more confidence in the spiritual life of the children that I have received into this church than I have in the spiritual condition of the adults thus received. I will go even further than that and say that I have usually found a clearer knowledge of the gospel and a warmer love to Christ in the child converts than in the man converts. I will astonish you still more by saying that I have sometimes met a deeper spiritual experience in children of 10 and 12 than I have in certain persons of 50 or 60!"
-- Charles Spurgeon

D.L. Moody once returned from an evangelistic meeting and reported that he had had "two and a half conversions." Someone asked him, "You mean two adults and a child?" Moody responded: "No, two children and an adult!" ... two children who still had their whole lives to give, and an adult who only had half a life left to give

"Jesus Himself received little children, and there can be no ground for supposing they did not there and then in some measure respond to his love. From the earliest days of infancy a child responds to stimuli, and particularly to the loving care of its mother.... If a child responds to his mother's care, may he not respond also to the care of God?"
-- from a study paper commissioned by the Church of Scotland

There is nothing like the heart of a child being brought up to love Jesus from infancy!
Posted by Tommy Lee at 2:41 PM