The Difference Between Pretending and Doing

The post right below this one commented briefly on the first part of this statement from Jesus: 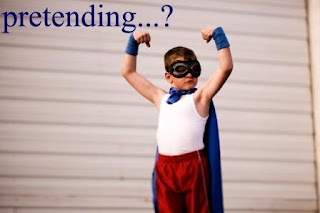 Really hearing the Word of God is critical. It's very easy to only pretend to be hearing it, because we've become comfortable & sleepy with religious familiarity. Speaking of corporate worship Kent Hughes once said: "It is all too easy to go spiritually brain-dead when the prelude begins, to 'say' prayers rather than pray them, to use the cadence of a confession as a rhythmic anesthetic, to mindlessly mouth the words of great hymns and gospel songs, to nod off during the sermon, to glibly mouth evangelical creeds -- and then imagine we're really spiritual."

What about the second part of Jesus' statement above? What about "doing"?

A young Korean man once traveled a great distance to visit the home of the missionary who had led him to Christ. As they talked about living in the kingdom of God,the young Korean stated that he had been memorizing some verses of the Bible.

The missionary then listened as the young man recited the entire Sermon on the Mount without error. Impressed, the missionary commended his friend on this remarkable feat of memory. But, being a faithful spiritual mentor, he also reminded the young man that we cannot merely "say" the Scriptures; we must also "do" them.

The young man responded: "Oh that is the way I learned them. I tried to memorize them, but they wouldn't stick, so I made a plan. First, I would learn a verse. Then I would do it to a neighbor. After that, I found that I could remember it."

"But be doers of the word, and not hearers only, deceiving yourselves. For if anyone is a hearer of the word and not a doer, he is like a man who looks intently at his natural face in a mirror. For he looks at himself and goes away and at once forgets what he was like. But the one who looks into the perfect law, the law of liberty, and perseveres, being no hearer who forgets but a doer who acts, he will be blessed in his doing."
James 1