"there but not there"

Click here to read Eric Felten's WSJ book review of Sherry Turkle's new book Alone Together.
Think about that title: Alone Together.
What a brilliant description of the kind of people we're becoming when all "the remarkable new ways of communicating—emails, texts, Facebook, Twitter, YouTube, Tumblr, Yelp!— [cause us to lose] the ability to make simple, genuine connections with actual human beings. Anyone who has spent much time in the presence of a texting zombie will recognize Ms. Turkle's description of the digitally dazed as being 'there but not there.'"
This book review is so good, I'm even going to save you the trouble of clicking on the link available above. Just read it:

In theater terms, we are 'on' all the time, expected to give a performance by responding to every text, every IM, every scribble on the Facebook wall.

Facebook might have made Holden Caulfield's head explode. The narrator of "The Catcher in the Rye" famously hated phonies and thus, naturally, the theater, with its masks and facades. One can imagine what he would have thought of writing a Facebook profile, an exercise that, as Sherry Turkle notes in "Alone Together," involves presenting oneself in a "performance."

She tells of a teen named Audrey who obsesses, as many do, over her Facebook profile: "Audrey is preoccupied about which photographs to post. Which put her in the best light? Which show her as a 'bad' girl in potentially appealing ways?" Audrey thinks of her endeavor as one of self-discovery, a way of delving into who she really is. But "what is up on Facebook," writes Ms. Turkle, is really "her edited life." That is, a phony life.

Ms. Turkle's book is one of many published in the past year or two asking whether the powerful electronic tools we are adopting may be deforming us. We've had Mark Bauerlein's "The Dumbest Generation," Nicholas Carr's "The Shallows" and, most recently, Daniel Akst's "We Have Met the Enemy," a book on self-control that worries about our addictive electronic distractions. If the overuse of electronics can provoke physical maladies—the carpal tunnel of desktop days is giving way to the mobile equivalent, "BlackBerry Thumb"—mightn't it also addle our brains or muddle the way we interact?

Inevitably, then, many of the concerns that Ms. Turkle expresses about our technology-driven lives aren't exactly new: e.g., that professionals are bound to the office by wireless tethers day and night, crowding out time for family and friends. What she brings to the topic that is new is more than a decade of interviews with teens and college students in which she plumbs the psychological effect of our brave new devices on the generation that seems most comfortable with them.

A professor of "social studies of science and technology" at MIT, Ms. Turkle is surrounded by technothusiasts. She acknowledges that "the triumphalist narrative of the Web is the reassuring story that people want to hear and that technologists want to tell." But "the heroic story is not the whole story." 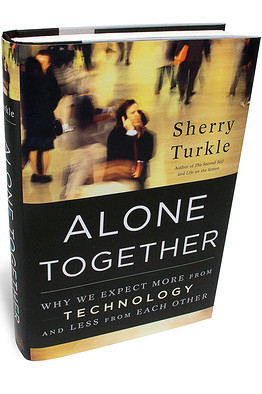 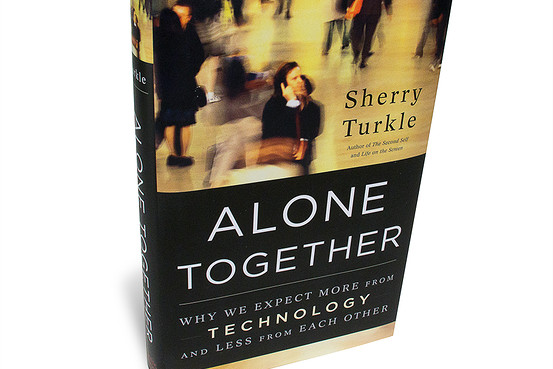 Teens may embrace the peculiar sociability that the wireless computer makes possible, Ms. Turkle says, but they do so with unease and ambivalence. To put it in theater terms, they are "on" all the time, expected to respond immediately to every text, every IM, every scribble on their Facebook walls. There is no escape from the pestering, nudging, hectoring, chattering demands of being connected. Many high-schoolers are more exhausted than exhilarated by their virtual lives. "I can't imagine doing this when I get older," says one student about the hours he devotes to meeting the demands of his online social life. "How long do I have to continue doing this?"

Students are also aware that the virtual life on the Web leaves a more thorough, durable and potentially problematic record than their meat-world existence. Conversations on the playground are of the moment, but chat with a pal via instant-messaging and he just might be archiving the exchange. Ms. Turkle talks with teens who realize, painfully, that they will never escape the indiscretions photographically memorialized on Facebook but who still can't imagine opting out of the social network.

Oddly, though students carry their cellphones everywhere, they aren't fond of talking on the phone. Text is the medium of choice, and it isn't just about convenience. It is a way of being guarded, of putting up a barrier so that honest reaction isn't revealed.

Mandy, a high-school sophomore, avoids speaking on the phone because it entails conversation, which is dreaded for a number of reasons: "It is almost always too prying, it takes too long." A 16-year-old at another school abjures the phone because, "on the telephone, too much might show." A girl named Meredith explains why she prefers texts to phone calls, especially when she is getting bad news: "I didn't have to be upset in front of someone else." The students Ms. Turkle interviews tend to prefer having time to compose their thoughts (no doubt a good thing) and the ability to hide that care behind the appearance that their texted words have been tossed off casually. As Ms. Turkle puts it, they prefer "a deliberate performance that can be made to seem spontaneous."

Ms. Turkle worries that, for all the remarkable new ways of communicating—emails, texts, Facebook, Twitter, YouTube, Tumblr, Yelp!—we're losing the ability to make simple, genuine connections with actual human beings. Anyone who has spent much time in the presence of a texting zombie will recognize Ms. Turkle's description of the digitally dazed as being "there but not there."

We won't know for a long time—an eternity in these lightspeed days—whether or how the digital revolution will end up rewiring our brains. Ms. Turkle warns that we are now "in an experiment in which we are the human subjects." Are we guinea pigs who can no longer tolerate the slightest solitude? And is that a new norm we're willing to embrace? A generation ago, Ms. Turkle observes, it would have seemed almost pathological to send messages to one's friends dozens of times a day. Now it's common. "But a behavior that has become typical may still express the problems that once caused us to see it as pathological."

"Pathological" may be a bit strong, but you might well call such relentless communication "needy." We know what Holden Caulfield would have called it.

Email ThisBlogThis!Share to TwitterShare to FacebookShare to Pinterest
Labels: Books, Glorious Ruins, Quotes Worth Pondering, This is not friendship. This is distraction.