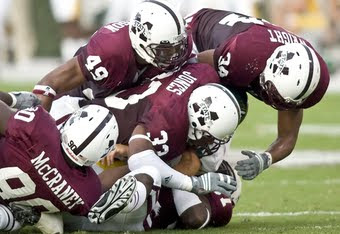 Regarding the SEC Western Division Championship, I feel it's only fair to give Alabama, Arkansas, Auburn, LSU, & Ole Miss this warning ahead of time. If you wish to surrender now, everyone will understand.
From Brett Hudson of the Decatur Daily
Mississippi State head coach Dan Mullen: winner.
When Mullen told the press that he only uses about 60 percent of his playbook in a year because that's all that applies to a given team, he cemented himself as an excellent ball coach.
Why? Because that proved that he's a personnel coach.
Personnel coaches are coaches that adapt their systems to the talent they have available, which are foils to scheme coaches who run the same scheme regardless of talent...... It looks like Mullen...... is ready to cement himself as an excellent football coach. Which he is: the rest of the nation just doesn't know it yet.
From Jay G. Tate of the Montgomery Advertiser
Mississippi State hasn't challenged for a Western Division title in nearly a decade, but many believe this is the year things change for the Bulldogs.
And their coach isn't scared to discuss his optimism.
Mullen..... has said all along that advancing to the SEC championship game and beyond is his goal.
Fewer people laugh at that prognostication these days.
"I think people maybe can look and say: Hey, it's not as amusing; they actually have a chance to do it," Mullen said. "I think everybody understands how hard the SEC West is. The task this year is not going to be any easier for us than it was last year to get to Atlanta."
Posted by Tommy Lee at 6:51 AM

Email ThisBlogThis!Share to TwitterShare to FacebookShare to Pinterest
Labels: Who Let the Dawgs Out