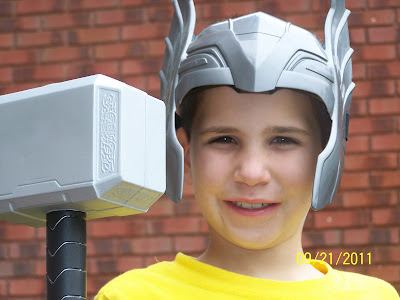 This Asgardian hero turned 9 today. And he is a champion of joy and happiness in our family. Ever since he was a baby, he's just woken up happy and has made it his mission to make everyone around him happy all day long.
His name, Jaden, is Hebrew for "Yahweh has heard." And indeed, the Lord did hear our prayers for another child and gave generously to us out of his bountiful goodness! There's a Jaden in the Bible as well -- Jaden the Meronithite. He helped rebuild the walls of Jerusalem in Nehemiah 3.
And my prayer for you, Jaden, is that you too will be used mightily of the Lord to build up his kingdom and his church, serving your Savior and serving your neighbor in the mighty name of Christ, the true Hero.
"So if there is any encouragement in Christ, any comfort from love, any participation in the Spirit, any affection and sympathy, complete my joy by being of the same mind, having the same love, being in full accord and of one mind. Do nothing from rivalry or conceit, but in humility count others more significant than yourselves. Let each of you look not only to his own interests, but also to the interests of others. Have this mind among yourselves, which is yours in Christ Jesus, who, though he was in the form of God, did not count equality with God a thing to be grasped, but made himself nothing, taking the form of a servant, being born in the likeness of men. And being found in human form, he humbled himself by becoming obedient to the point of death, even death on a cross. Therefore God has highly exalted him and bestowed on him the name that is above every name, so that at the name of Jesus every knee should bow, in heaven and on earth and under the earth, and every tongue confess that Jesus Christ is Lord, to the glory of God the Father."
... Philippians 2
Couple of good Jaden stories:
Yesterday morning during our time of family Bible reading, the Scripture passage we read spoke about marriage. I always take an opportunity like that to speak to my children about the importance of who they marry. After making a comment or two along those lines, I asked a question. Something along the lines of, "So, what are you looking for in marriage?". Jaden -- who's recently had The Princess Bride read to him, and watched the movie as well, immediately spoke up - "Twoo Woooove" - in perfect imitation of the archbishop in the movie.
Yesterday afternoon Jaden was commenting on his birthday breakfast. His older brother -- who knew something about the breakfast that Jaden did not know -- simply smiled & said, "But I know something about that that you don't know." Jaden -- in perfect imitation of The Man in Black (from The Princess Bride) -- then says, "I am not left-handed!"
These two pictures are close to a year old. Last year for his birthday Jaden got an old, used trumpet. He's fascinated by the trumpet. He's always watching the trumpet players in church. With awe. One Sunday he brought his trumpet to church, and waited patiently for the service to end. Then, he very deliberately took his trumpet out of its case & went up to join the other trumpet players as they played the postlude. He was thrilled. It was a beautiful thing to see. 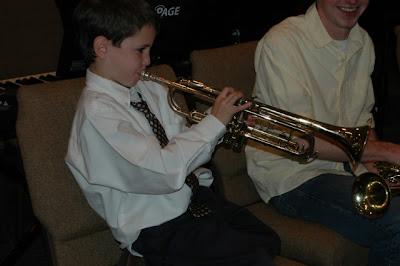 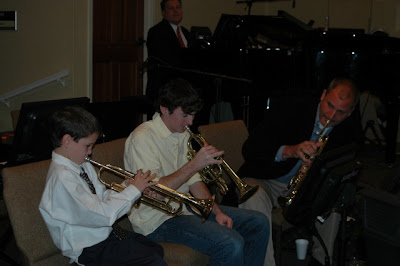