The Glory of the Gospel, Part VI: Atheism? 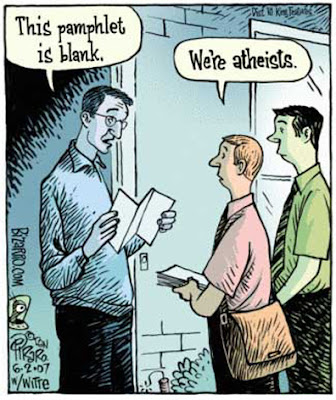 To understand this post, you're going to need to start reading at the beginning:
Part I... Part II... Part III... Part IV... & Part V.
The fifth representative we bring to the edge of the pit is the atheist. It may sound strange to include him in this survey of "religions," but there is a definite system of "belief" at work in the person who says "I do not believe in a god."
This is the person who looks at all manner of theistic belief and says, "We ought to grow up. There simply is not sufficient evidence to say that there is, in fact, a divine being. We need to be honest with this, even if we don't like it. We need to be unflinchingly scholarly and clear-headed and willing to be clear and consistent with this fact: There is only one sin, and that is to call anything else a sin!"
(parenthetical note: There is absolutely no such thing as a "consistent" atheist in this regard, but that is still what he would have to say.)
So, the representative of atheism comes to the pit and says, "My friend! By incredible social, economic, educational, and personal sacrifice and giving, we may be able to get you out of that pit. ... IF we cause the right laws to be installed and IF we practice the right things in private and in public... maybe... just maybe... we can get you out."
(parenthetically again: This is a little odd. If you believe you came from nothing and if you believe that you are going to nothing, then why is there this undeniable and inescapable pressure to make something of life in between the nothings? Why is there this interest in getting out of suffering and pain? Why? If everything comes from nothing and everything is going to nothing, why - and how - would you bother yourself with something like morality in between? It has no basis in anything. But again - there is no such thing as a consistent atheist.)
So. What have we heard from all of these representatives?
Illusion. Desire. Good counsel. Radical Obedience. And now: "Education and hard work might get you out."
Ready for something different?
... to be continued ...
Posted by Tommy Lee at 5:17 PM

Email ThisBlogThis!Share to TwitterShare to FacebookShare to Pinterest
Labels: The Gospel