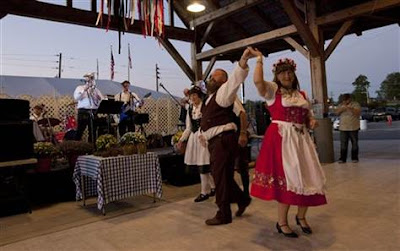 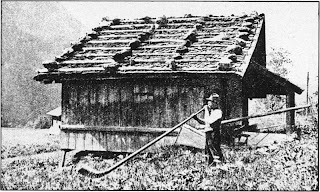 What's an alphorn, you ask? It's that incredibly long horn that the farmer is using to call his cattle in this awesome picture to the left.
You see the man dancing in the picture above? That's Col. Johann Gottfried Cullman. He and several other German immigrants settled in Cullman, Alabama in 1873. For many years after that, it was the German language you would hear in the shops and churches when you visited Cullman. It's a cultural influence that can still be seen here and there throughout the city.
The Colonel graciously invited my available kids & me to be his guests at the Oktoberfest Feast last night, and it was delicious!
Sadly, one of my boys fell ill after dinner ... some people just can't handle their Oktoberfest ... so we had to leave early. But we'll be back next year! It was great.
And thanks to Larry R. for introducing me to Col. Cullman! If you take a close look at the picture above, you may see Larry as well.