My Favorite People Are Famous!

This is from yesterday's edition of The Decatur Daily... and what makes this story a special point of thanksgiving and joy for me is remembering THIS. 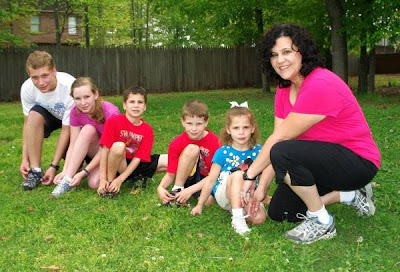 Jonathan, left, Calli, Jaden, Joseph, Caitlin and their mother, Elizabeth Lee, prepare for a running session last week. The family will be running in the 5K and 1-mile runs Saturday at the 33rd Annual 3M/Red Cross River City Run at Point Mallard.

Decatur's Jonathan Lee is thinking about the number 20 — as in 20 minutes.
His mom, Elizabeth, is more concerned with the number 5 — as in her children.

Last year, Lee, then 13, posted a 5-kilometer time of 23 minutes, 29 seconds, good for third place overall in the 3M/Red Cross River City Run. This year, he is shooting for a 20-minute time. And his parents and four siblings won't just be watching him run — they'll be running in the event, too.

While none of the Lee gang have signed up to run in the 10K run, three are running in the 5K and three more in the 1 mile. Last year's River City Run was the family's first official run.

"Our family has been running more this year," Jonathan said. "We all are expecting to have better times."

He said he would increase training and distance this week.

"We just started running for the health benefits of it, so we decided last year to do a few races," Elizabeth said. "We didn't know what we were getting into when we arrived at the River City Run last year. But it was so well organized, and you make friends quickly. We've seen a few of the runners at some other runs we've competed in."

She said her children enjoyed the T-shirts, gift bags and refreshments.

"There were plenty of 3M Band-Aids in the goodie bags," she said. "With our children, we got plenty of use out of them."

Calli said she likes the layout of the River City Run. "It is so pretty," she said. "You run by the water, under the shade trees, and the course is mainly flat."

Elizabeth said her family enjoys reading, hiking and biking when it isn't training for one of the area races.

Debbie Heard, executive director of the Morgan-Lawrence Chapter of the American Red Cross, said her organization counts on the River City Run to help fund programs.

"The money goes to fund food, shelter, clothes for families affected by storms and fires," she said.

Heard said the run raises about $10,000. She said she will be volunteering at the run, registering participants and handing out refreshments and awards.

The race organizers will accept entrants until race time.

The runners will have chip timing on the USATF-certified course. Last year's 10K and 5K runs had 300 finishers.