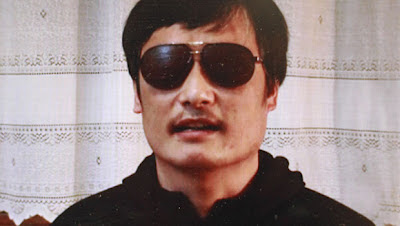 Have you read the amazing story of Chen Guangcheng yet?... You need to start here:

Telling the Whole Story
The Flight of Chen Guangcheng

The story of Chinese dissident Chen Guangcheng is the stuff of which movies are made: illiterate until he was in his twenties, he not only taught himself how to read, he taught himself the intricacies of Chinese law.

He used his legal skills to defend the victims of government oppression: disenfranchised peasants, the disabled, and women forced to have abortions as a result of China’s infamous “one-child” policy. This last effort officially made him an enemy of the state. He was arrested and convicted on what most observers consider to be trumped-up charges.

After serving fifty-one months in jail, he was placed under house arrest. In an effort to silence him, officials surrounded his home with guards, surveillance cameras and even installed a jamming device to prevent him from communicating with the outside.

In response, Chen played what the “New York Times” called a “cat and mouse game” with his would-be jailers: He tried to a dig a tunnel, smuggled videos and, finally, on April 22nd, he escaped. The escape was so well-executed that his jailers didn’t know he was gone until the following Thursday.

He then made his way, via a series of safe houses and with the help of fellow dissidents, three hundred miles to Beijing and, eventually, the U.S. Embassy.

Oh, by the way, did I mention that Chen is blind?

Throw in details like actor Christian Bale’s being manhandled by Chinese guards when he tried to visit Chen, and it’s little wonder that the media is all over the story. Yet, in all the coverage there is no mention of what motivates Chen Guangcheng: Namely, his Christian faith.

Chen is part of what is called the “weiquan movement.” It’s a group of “lawyers, activists, intellectuals and ordinary citizens who aim to push the boundaries of reform by using China’s existing laws and courts to defend human rights.” They are overwhelmingly Christian. Li Subin, one of the movement’s best-known activists, says that he takes his inspiration from Proverbs 21:3, “to do righteousness and justice is more acceptable to the Lord than sacrifice.”

This willingness to push has made them a target for Chinese officials. Like Chen, Li has served time in prison for his efforts on behalf of the poor and marginalized.

Reading about Chen, Li, and their comrades, I couldn’t help but think about Dietrich Bonhoeffer and his comrades. In both instances, the response to monstrous evil was to speak out at great personal risk. Just as Bonhoeffer decided that his place was in Germany alongside his suffering brethren, Chen has said that he does not wish to leave China and wants to “continue his efforts for Chinese society.” However, as I record this, it appears that he now fears for the safety of his family and may seek asylum in the U.S. for himself and his loved ones.

Whether he will get the chance is another question because, in another unfortunate parallel, it’s not-at-all clear that the rest of the world is willing to hold China accountable. News reports use words like “complicated” and “crisis” to describe the impact of Chen’s escape on US-China relations — relations in which righteousness and justice are trumped by dollars and yuan.

However it turns out, Chen’s full story needs to be told. What he did is remarkable. And why he did it — faith in Jesus Christ — is no less so.

Editors Note: Chen Guangcheng, accompanied by his family, said he is confident that the Chinese government will allow him to study in the United States.
Posted by Tommy Lee at 1:31 PM