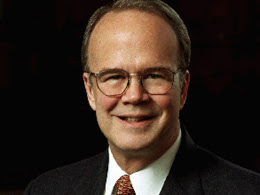 Pastor James Boice died on this date in the year 2000.  Who was Boice & what does that matter, you ask?  Here's a brief writeup someone published this morning to honor him...


Upon hearing of the sudden death of James M. Boice on June 15, 2000, another pastor prayed in his pastoral prayer the following week in his congregation  that he wished the Lord had called him home instead.  That stark comment illustrates the appreciation which his fellow pastors and Reformed people everywhere had for the man and ministry.

Dr. James Boice was first and foremost a pastor-teacher.  For 32 years, he had fed the people of God at the historic Tenth Presbyterian Church in Philadelphia, Pennsylvania.  When countless churches were moving out of the inner city for the suburbs, Dr. Boice and his congregation stayed right where they were to be a witness to downtown Philadelphia.  Far from the congregation dwindling, it grew from 350 people in regular attendance to more than 1200 persons in three services.  Under his spiritual leadership, and the local Session of Elders, the light of the gospel was extended beyond the congregation,  to international students, women with crisis pregnancies, homosexual and HIV positive clients, and the homeless.

His ministry also went beyond the four walls of the church.  For a decade, he served as Chairman of the International Council of Biblical Inerrancy.  He founded the Alliance of Confession Evangelicals in 1994, calling for a new Reformation among American churches, its pastors and people.

America did not solely have his gifts of teaching either.  More than thirty countries of the world had his teaching ministry delivered to them.  Yet for many of us, it was his forty books on both Bible books as well as biblical themes which brought the gifts of this man to us.  We who were pastors had the privilege of using his biblical commentaries as core books for pulpit series.  We knew that there would not be doctrines or practices which would be contrary to either our biblical faith or for that matter, our creedal summaries of doctrine.  We could quote from his many pages with complete confidence.    Lay people could read for their devotions or Christian sabbath reading his books for their edification.  That reading would suppliment what their pastors said to them from the pulpit.  It was thus a memorable  ministry to the people of God in this generation.