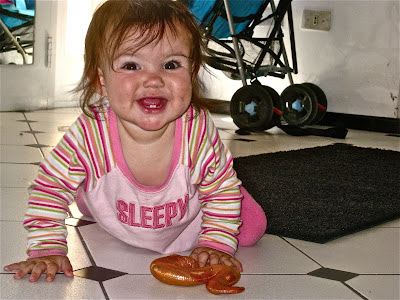 Here are some more excerpts from our missionary friends Sean & Amber & Patience in Peru... but perhaps you should sign up for the full newsletter in all of its enjoyable glory?  Ask me how.

I (Sean) am still getting rocked by Jim Hamilton’s “God’s Glory in Salvation Through Judgement: A Biblical Theology”. It’s truly an amazing book. I’m so thankful for men who have spent so much of their life culling the very words of God. If you haven’t read the book, you really should.

Thankful for my friends back in the States. God has given us a faithful few. I’ll take that over a fickle million any day.

My wife is awesome. Period.

While I was lying in the bed, crippled with abdominal pain, and Patience was throwing her guts up all the live-long-day, my wife was there, caring for us both.

Since the day I married her, she has been the definition of “Help Mate”. In my eyes, she’s the eschatological Eve.

She has been forever patient with me (a miracle in its own right).

She never makes disrespects me in public, and always handles my sin privately.

She is the most sympathetic and empathetic person that I know.

She prays the most beautiful prayers.

Her holiness is something that I constantly aspire to, and consistently fail to achieve.

She left all that she has ever known and loved to take the gospel to the ends of the earth.

She doesn’t worry about things that might get most women’s socks all ruffled up.

She submits to my leadership in such a way that I feel the need, all the more, day after day, to lay down my life for her.

She reminds me when I forget my devotions.

She never makes me feel like I’m less than a man.

Every kiss from her feels like the first one. Maybe even better.

There is nothing that she won’t do for the glory of the name of Christ and the good of her family.

I don’t deserve her. Not even in the slightest. But God, in his abundant mercy, gave her to me. How blessed can one man be?

We watched “The Shawshank Redemption” today. Great movie. Maybe the best prison movie ever made. It got me (Sean) thinking. I remember being 17 y/o. I remember everyone I knew then, how they all told me that I would end up dead or in prison. They weren’t crazy for saying that.

This is what my life was like from the age of 15:

Psychiatric hospital (2wks) (twice during the age of 15)

They said I had no hope. They were right. What hope is there for a man who sells his own mother drugs? But here’s what they missed...what I missed: God loved me. He loved me before the foundations of the world. He loved this wretched, depraved, God hater. Then, at the right time, he called me. Irrevocably. It had to be that way, because I would have never come at all, left to my own desires. He called me. He broke me. He healed me and called me his son. This bastard, this man who never had a father, is now a child of the God of the universe.

There is no answer. There is no reason. One day, maybe tomorrow, maybe a lifetime from now, I will stand before his glory. I will fall at his feet and cry out, with what words I can muster, and I will ask “Why me?”. And you know what? Christ will be the answer. He is all in all. He is my righteousness. My salvation. He is the savior of the whole world, for  all who would believe. If any of my friends reading this doesn’t know that, doesn’t REALLY know that...doesn’t feel it in their bones like a thousand fires burning white hot with passion...oh my friend...repent and believe! Repent of your sins. Trust in the God who calls you to himself. He isn’t far from any one of us. In the words of one famous man: “With one hand, God is extending to you his grace, mercy, and love. With the other, he is holding back his wrath”. Friends, he won’t hold it back forever. Throw yourselves upon him. You are loved more than you could ever imagine, and you are guiltier than you can comprehend. But there is a hope that shines brighter than the sun, and he has a righteousness foreign to our own. He offers it to us, in his broken body. If we would turn from our sins, repent, and trust in his sacrifice, he will heal us with his balm; clothe us in his white robe of righteousness; carry us into joy everlasting.

That’s fine by me. God has a track record of using the lowly things of this world to put to shame the wise. We all have to die. 100% of us. And on that day, I’ll stand before the glory of my master, fully reflected in the face of Christ Jesus my Lord. That kind of beautiful truth is enough to make any man disregard the disparaging opinions of ten million detractors and naysayers. On that day, this nobody from nowhere will be exalted at the right hand of Christ.

Maybe they’ll see me then...

But maybe I’ll be too busy falling at the feet of Jesus to care if they do...

Language school was particularly rough today. Some days you leave class feeling like the master of all things spanish. Other days, days like today, you leave school feeling like you’re trying to learn an ancient Icelandic dialect. On a positive note, we are more motivated than ever to study hard and pray harder.

A few days ago I remembered...again...that I don’t have the Ten Words memorized. No esta bien. I guess that’s one of the downfalls of not growing up in a Christian household. You take care of stuff like that in Awana, or some VBS. Well, no more excuses. Amber and I went ahead and memorized them. The memorization led to a pretty good little rehash study. It’s always good to be reminded of the character of God expressed and shown clearly in his law.

I’m imagining a conversation that goes something like this:

“Well, there are a great many brothers and sisters out there (good, God fearing Christians), who are ready to put in work.”

“Praise God! I don’t see where the problem lies...”

“Well, it just seems like so many of you “theology guys” are missing the point. There’s work to be done. You know that. Why are we...why are you still insisting that we fight and argue over doctrine? Don’t you know that doctrine divides? How are we ever going to reach the world with the love of God if we’re busy arguing over the Trinity, or whether or not the bible is inerrant? Can’t you see that we just need to put all of that aside and focus on the work left to be done? We just need to stop arguing over things that will cause division. Don’t you agree?”

“My friend, I don’t agree. Actually, there is no true unity unless we have unity in truth. Anything else is a house built upon a corner stone of dust and sand.

Doctrine does not divide Christ’s church, it unites it. If we look at church history, the strongest times in the life of the church, the times with the most robust unity, have ALWAYS been when the truth of God’s Word has been attacked and, subsequently, defended.

The work left to be done is called “Discipleship”. Everything else is a runoff from the great “Discipleship River”. If we cast aside our theological convictions, what will we be discipling people in? Humanism?

What we believe about Christ, Man, Sin, Grace, Heaven, Hell, Death, etc., these are the things that INFLUENCE our work. What we believe effects what we do. Our beliefs are the base of our “pyramid of labor”. They undergird it. They support it. They fuel it. They empower and impassion the work that Christ has called us to.

Finally, I think I’d have to say that, rather than discarding doctrine, we should be all the more scrutinous and judicial as the time goes on. What we need now is not a dash of pluralism atop our Figgie Doctrine Pudding. No, we need robust men and women of God, teaching, preaching and living a Christ exalting, God glorifying Gospel. Compromise isn’t the answer, accurate knowledge of God through His word, that’s the answer.”

I’m now more convinced than ever that bad doctrine hurts people. It hurts God’s people by causing them to live a subpar Christian lifestyle.

It hurts non-christians, too. It tells them that they are ok when, in reality, nothing could be further from the truth. What we need now isn’t more watered down, platitude dispensing, truth compromising, sin embracing, silhouettes of people who call themselves Christians. No. What we need now is the power of God, in the lives of his saints, through the power of his Holy Spirit, revealed in the Word of Christ, for the good of all people and the glory of God. Anything less is a mediocrity that should be resisted to the point of death.

Email ThisBlogThis!Share to TwitterShare to FacebookShare to Pinterest
Labels: DeMars