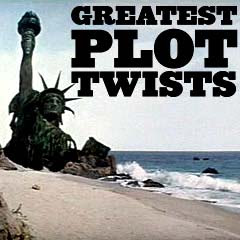 Tomorrow at DPC we officially start the new sermon series in Ruth.  (Last week we merely introduced the book by meeting the main players.)

One thing we mentioned in last week's introduction was the surprise ending in this book.  In the development of the Bible's plot line, it's right up there with "Oh!  HE's a ghost!" kind of moments.

But what's equally as shocking is the surprise beginning in Ruth.

The whole story (yes, it's true historical narrative... but it's also a story) starts off by introducing us to a man and his wife and their two sons -- naming all four of them.

We are given the strong impression that the story we're about to read is going to be about the men:  Elimelech, Mahlon, Chilion.  And Naomi (the wife / mother) will be there too.

But after introducing this trio of men the story suddenly takes an unexpected twist.

In five short verses all the men are completely wiped off the stage.  We're left looking at three grieving widows... left alone... in a male-dominated, pagan culture.  A culture that only values women based upon their relationship & usefulness to the men.

Normally in the ancient world the story would be over at this point.

But in Ruth the story is just getting started.  It's not at all the story we thought we were going to read.  But this is the story that God Himself is writing for us... and drawing us into.  Come join us tomorrow for:


SHADOWS OF THE KINSMAN REDEEMER
II.  OUT OF THE FAMINE AND INTO THE NIGHTMARE