Open Letter to the Boy Scouts, from Harry Reeder 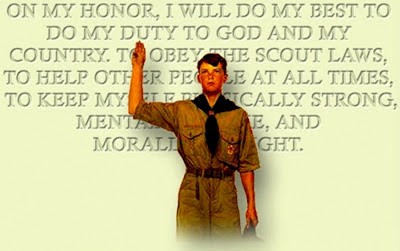 As an Eagle Scout, I've been very disappointed in the news coming out of the Boy Scout headquarters this last week or more.  This is a far cry for the sacrificial character of moral leadership in which I was once instructed.

Below is an open letter that Harry Reeder has written to the Boy Scouts of America.  Pastor Reeder serves Christ and his people at Briarwood Presbyterian Church in Birmingham, Alabama.

I, along with many others who have appreciated the efforts and legacy of the Boy Scouts of America (BSA) are deeply disheartened and dismayed by the proposed policy change from the National Leadership of the organization. As Pastor of a church in Birmingham, Alabama with a longstanding and effective Boy Scout Troop and Cub Scout Pack which also enjoys productive relationships with other like-minded Troops and Packs in Birmingham, I cannot say what our ultimate response will be if this policy change is enacted. That decision will be determined by the governing board of our church. However, I am fully aware that if the policy change does take place there will be a clear response based upon our ethical convictions and values which were once shared with the BSA and we hope will yet continue to be shared.

On a personal note, my disappointment with the National Leadership of the Boy Scouts of America can be summarized in three areas.

1. Contrary to the stated aims and historic practice of promoting principled leaders through the BSA, the proposed policy change betrays any notion of principled leadership. I am not immediately referring to the content of the proposed changes concerning the qualifications for membership and leadership but to the example of leaders at a national level who seem to have no abiding convictions as evidenced by responding to external pressures with a proposed policy which if enacted potentially exposes local leaders to both legal and social vulnerabilities by requiring them to make the decisions that the national leadership ought to make on behalf of the organization. It is staggering that an organization devoted to developing principled leaders is being lead by leaders who evidently not only refuse to lead but who willingly expose subordinate leaders to personal and organizational liabilities by requiring them to make decisions which should be made at a national level. By not providing principled leadership the local leaders and participants will be placed in potentially disastrous positions financially both personally and organizationally.

2. The content of the decision clearly embraces and affirms the sexual anarchy of this present age including the irrationality of assigning civil rights to sexual practices, preferences and choices. Therefore the longstanding legal and social benefits of a heterosexual, monogamous, marital ethic governing sexuality which is absolutely foundational to an ordered society will be undermined and ultimately abandoned in light of this decision. This response to political, economic and social pressure by those who embrace a commitment to culturally mainstream sexual chaos, promiscuity and perversion will be the demise of the organization as it presently exists and perhaps to its existence at all. Why would the national leadership embrace such a decision in light of these assured effects. The only conclusion possible is that the current national leadership has determined that its historical ethical values have a price tag. In a word ethical values are now for sale in the BSA for promised continued financial support. The end does not justify the means. The means will always ultimately determine the end.

3. The third reason is the short-sightedness manifested in not anticipating or caring for the multiple liabilities which the proposed policy change will assuredly produce. The Lesbian, Gay, Transgender Movement (LGTM) has no desire to be a part of the current Boy Scouts of America. It only desires to redesign and redefine its purposes and values at best and its actual destruction at worst. Those Troops and Packs in the organization who attempt to remain faithful to its ethical commitments and historic values will then become the new targets of a militant LGT Movement. This means they will also become targets for the media assault and significant legal and financial threats. In addition some of the Troops and Packs will determine that they cannot continue in an organization that will exchange ethical values for promised financial support and/or that they cannot trust a national leadership that has exposed them financially and legally. While leadership vulnerability in local organizations is troubling, even more troubling is the prospect of exposing the BSA participants at a highly impressionable life stage to the sexual anarchy of the present age. Finally the BSA will cease to exist as we have known and appreciated it for decades. It remains to be seen as to how many Boy Scout Troops and Cub Scout Packs will either withdraw to another organization or simply no longer exist.

I would simply request that first you consider the almost innumerable negative consequences which will inevitably accompany this policy change. Then in light of the threats being made by those who are opposed to the historic values and mission of the BSA, provide rational and courageous leadership for the long term viability of the Boy Scouts of America by recalling this policy change and reaffirming the tried and true policies and practices of this volunteer organization which have served you well for decades.