The Book of Deliverance 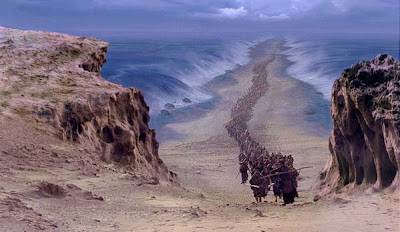 If you're reading the Scriptures along with the reading plan discussed HERE, then you're in the midst of the book of Exodus.

This is a book of salvation; of rescue.  This is where we are taught the origins of Israel's status as God's covenanted people, the kingdom of priests, the holy nation in the ancient world.  This is where God's ancient promises to Abraham begin to take on a life of their own.

We read of Yahweh's revelation of his name; we read Moses' firsthand account of how Yahweh brought his people out of Egyptian slavery with a mighty hand, after 10 devastating plagues.

The institution of Passover.  The crossing of the Red Sea.  Then the journey into the wilderness, the confrontation with the Holy One on the burning mountain, the awakening realization of the glory of God, the giving of the Ten Commandments, the instructions for the Tabernacle, the centrality and holiness of worship -- in which offerings for sin are made and fellowship with a forgiving God is renewed... 40 chapters... 1,213 verses.

It's a dramatic book, and the main "actor" is none other than God Himself.  In fact, we "see" him appear at the three most significant moments in the book -- at the burning bush, on Mount Sinai, and in the Tabernacle.

But we also get to know Moses -- the deliverer, mediator, & lawgiver, who prepares us for Christ.  And of course we get to know the people of Israel -- the seemingly incorrigible sinners who are saved, no thanks to any merit of their own.  (They, of course, prepare us to meet ourselves.  We marvel at God's patience with them.  And with us.)

We begin to understand more of the covenant, which is the heart of God's relationship with his people and the backbone of the Bible.


"Exodus is about a man, Moses, who sets all against the reality of divine sovereignty and measures all in terms of God's requirements.  Exodus is about a nation, Israel, moving from slavery in Egypt into freedom.... But ultimately Exodus is about the God of the covenant who has instituted a new relationship between himself and those whom he has called to be his people.  It is about how he introduces himself to them, acts on their behalf and shows them the real difference it makes that the LORD [Yahweh] is their God, and about the patience he shows as he leads them out of their grumbling, even outright rebellion, until he comes to dwell in their midst."

If you're a Christian, you will find in this book a shadow of your own story -- how God has delivered you from bondage to sin and slavery to death.  You too have been set free, that you might journey to the Promised Land.  And you too will have to travel through a wilderness to get there.  But... you too will know that God Himself is dwelling in your midst, as you live this new life with him.

This book prepares you to understand the person and work of Christ.  In dozens of ways.


"[The Exodus] cannot possibly be fictional.  No nation would be likely to invent for itself, and faithfully transmit century after century and millennium after millennium, an inglorious and inconvenient tradition of this nature."