A Nation Waging War Against God 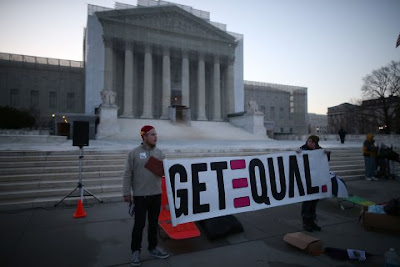 As I take a look at the headlines today (not the least of which is the conversation at the Supreme Court regarding the re-definition of marriage to include the idea of "homosexual marriage"), I'm reminded of the first part of Psalm 2:

Why do the nations rage (noisily assemble / conspire)
and the peoples plot in vain?
The kings of the earth set themselves,
and the rulers take counsel together,
against the Lord and against his Anointed, saying,
“Let us burst their bonds apart
and cast away their cords from us.”
He who sits in the heavens laughs;
the Lord holds them in derision.
Then he will speak to them in his wrath,
and terrify them in his fury, saying,
“As for me, I have set my King
on Zion, my holy hill.”

Carefully consider John Calvin's comments on this Psalm, searching to make the appropriate applications to this situation:

"We know how many conspired against David, and endeavored to prevent his coming to the throne, but David was thoroughly persuaded that he had been made king by divine appointment.  He encouraged himself by strong confidence in God against the whole world as he nobly poured contempt both on kings and their armies, because they waged war, not against mortal man, but against God himself.  The ground of such confidence was that he only followed the call of God.  From this he concluded that in his person, God was assailed; and God could not but show himself the defender of the kingdom of which he was the founder.  God principally proves his faithfulness in this, that he does not forsake the work of his own hands, but continually defends those whom he has once received into his favor.

"By honoring himself with the title of the Anointed, David declares that he reigned only by the authority and command of God.  That he prophesied concerning Christ, is clearly manifest from this, that he knew his own kingdom to be merely a shadow.  Those things which David testified concerning his own kingdom are properly applicable to Christ.

"Let this, therefore, be held as a settled point, that all who do not submit themselves to the authority of Christ make war against God.  Since it seems good to God to rule by the hand of his own Son, those who refuse to obey Christ himself deny the authority of God, and it is vain for them to profess otherwise.

"Wicked men may not conduct themselves as wickedly as they please, but they shall at length feel what it is to make war against heaven.  God is so far exalted above the men of this world, that the whole mass of them could not possibly obscure his glory in the least degree.  As often, then, as the power of man appears formidable to us, let us remember how much it is transcended by the power of God.  In these words there is set before us the unchangeable and eternal purpose of God effectually to defend the kingdom of his Son, of which he is the founder; and this may well support our faith amid the troublous storms of the world.  Whatever plots, therefore, men may form against it, let this one consideration be sufficient to satisfy us, that they cannot render ineffectual the anointing of God."


Wow.  Pray for our nation.

Providentially, my Bible reading this morning had me in Romans 1---the second half of which terrifyingly describes God's wrath against an idolatrous culture which God eventually gives up to "dishonorable passions."

But I'll save that very important matter for a future post.

If you're still with me this far & if it's still Thursday morning when you're reading this, pray for my wife.  She's currently in surgery for kidney issues.