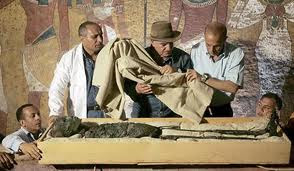 In the ancient world when a "great man" died, his tomb was enshrined.  You can see evidence of that when you read the Bible itself, but it's also easily seen in ancient world studies outside of the Bible.

That was the common custom:  preserve and venerate the tomb of a prophet or holy man (or an otherwise great man) as a shrine.

And so, consider the four major religions that are based upon the work of a great man (rather than merely based upon a set of principles or ideas)...

Judaism:  Abraham, who died around 4,000 years ago, died and was buried in Hebron.  The Jews still today consider his grave a holy site and venerate it.  It's a shrine.

Buddhism:  The Buddha's tomb is preserved in India.  It's a shrine.  People flock to it every year by the thousands.

Islam:  Mohammed died on June 8, 632.  His tomb is in Medina.  It's also a shrine.  People flock to it every year by the millions.

When Jesus was walking around in Palestine, he could have himself visited over 50 tombs / shrines of dead holy men, if he wanted to do so.  And that's just the 50 or so that we know about.

But for Jesus himself?...  There are no bones inside of a tomb getting venerated or worshiped.

"I am the resurrection and the life..."
Jesus