The Book of Examples 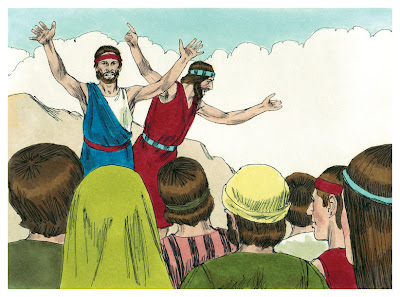 If you're using the Bible-reading plan mentioned HERE, then a few days ago you made it to the end of the book of Numbers.

This is the book that Paul is referring to in 1 Corinthians 10, when he says this:

Now these things took place as examples for us, that we might not desire evil as they did. Do not be idolaters as some of them were; as it is written, "The people sat down to eat and drink and rose up to play.” We must not indulge in sexual immorality as some of them did, and twenty-three thousand fell in a single day. We must not put Christ to the test, as some of them did and were destroyed by serpents, nor grumble, as some of them did and were destroyed by the Destroyer. Now these things happened to them as an example, but they were written down for our instruction, on whom the end of the ages has come. Therefore let anyone who thinks that he stands take heed lest he fall. No temptation has overtaken you that is not common to man. God is faithful, and he will not let you be tempted beyond your ability, but with the temptation he will also provide the way of escape, that you may be able to endure it.

Therefore, my beloved, flee from idolatry.

Numbers is 36 chapters (1,288 verses) of examples from which God's people may still learn much-needed truths and wisdom today.  This book records all that happened during Israel's 40 years of wilderness wandering, and it's recorded by a master storyteller.

This book is (literally) a journey.  And---like most journeys---there are good days & bad days.  But, like Paul says above, there is much to learn from this book---both the "law" parts and the "story" parts.

Here you read of God's judgment on sinners, his miraculous intervention to deliver his people, his presence with his people in the pillar of fire & cloud, the blossoming of Aaron's rod, the faithfulness of Joshua and Caleb, the leadership & courage & failure of Moses, the fiery serpents, the brazen serpent, the unwitting prophecies of Balaam, the water from the rock, etc.

It's a strong reminder of our own constant need of God's saving grace.

"The central message of the book... may be expressed in words which occur in... Romans 11:22---'Behold therefore the goodness and severity of God.'  In Numbers we see the severity of God, in the old generation which fell in the wilderness and never entered Canaan.  We see the goodness of God, in the new generation which was protected, preserved, and provided for.... Closely running up to this central message of the book are two other lessons---two warnings to ourselves; and these also may be expressed in words from the New Testament.  The first is a warning against presumption (1 Corinthians 10:1-12).... The second warning is against unbelief (Hebrews 3:12).... The New Testament itself interprets the book of Numbers for us...: 1. 'Behold the goodness and severity of God.'  2. 'Let him that thinketh he standeth take heed....' 'take heed lest there be in you---unbelief.'"

"In Genesis God elected a people, in Exodus he redeemed them, in Leviticus he sanctified them, and in Numbers he directed them."

"What then is the essence of religious rituals in the Bible?  It is a means of communication between God and man, a drama on a stage watched by human and divine spectators.  Old Testament rituals express religious truths visually as opposed to verbally.  They are the ancient equivalent of television."

"How faithful is God to promises made to an ungrateful and rebellious people?  Does God give people a second chance?  What does it mean to be a holy community, and how is that sanctity to be maintained?  What kind of leadership does a journeying people need on its way between promise and fulfillment?  How does God provide when the leaders struggle under their burden or even abandon their task?  These are some of the important questions addressed in the book of Numbers."

"The book of Numbers is a study in the contrast between God's faithfulness and human disobedience."