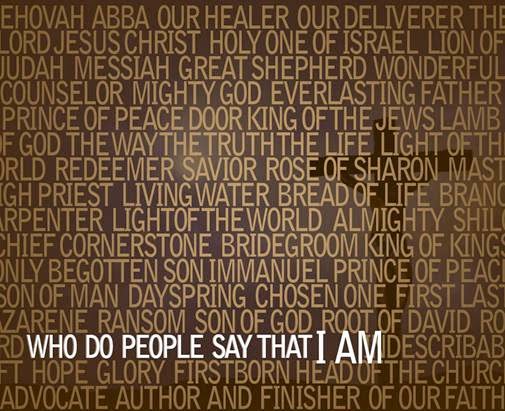 On Sunday morning, May 25, we're starting a new sermon series at DPC.  The question for this series comes from Mark 8.27...

We're going to spend 9 weeks letting Jesus himself answer that question, in his own words.

"What did God do?.... He selected one particular people and spent several centuries hammering into their heads the sort of God he was... Those people were the Jews and the Old Testament gives an account of the hammering process.

Then comes the real shock.

Among the Jews there suddenly turns up a man who goes about talking as if he was God.  He claims to forgive sins.  He says he has always existed.  He says he is coming to judge the world at the end of time...

I am trying here to prevent anyone saying the really foolish thing that people often say about him: 'I'm ready to accept Jesus as a great moral teacher, but I don't accept his claim to be God.'

That is the one thing we must not say.  A man who was merely a man and said the sort of things Jesus said would not be a great moral teacher.

He would either be a lunatic---on a level with the man who says he is a poached egg---or else he would be the Devil of Hell.

You must make your choice.  Either this man was, and is, the Son of God: or else a madman or something worse.

You can shut him up as a fool, you can spit at him and kill him as a demon; or you can fall at his feet and call him Lord and God.  But let us not come with any patronizing nonsense about his being a great human teacher.  He has not left that open to us.

He did not intend to."

(Thanks to Christine for the image used above!)