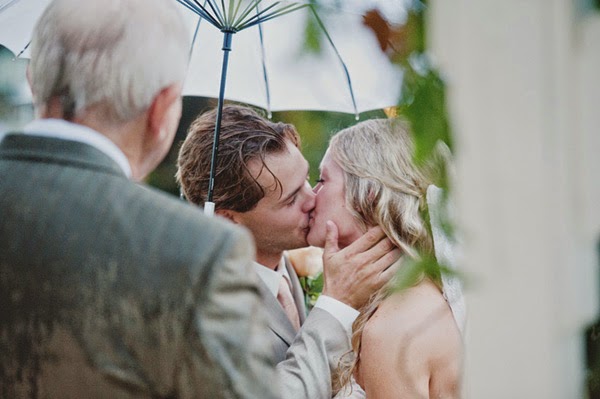 We've had several DPC weddings this summer, but the one from this past weekend was—in some ways—perhaps the most memorable.  It was an outdoor wedding, set in a gloriously beautiful backyard.  But with the rain and the flashes of lightning, we had to abridge some of the ceremony.

You asked that your wedding ceremony be centered around the theme of thankfulness.  Therefore we opened the ceremony with Psalm 100 as our call to worship, which included these exhortations:  "Enter his gates with thanksgiving, and his courts with praise!  Give thanks to him; bless his name!"

And you specifically requested Colossians 2.6,7 as the Scripture reading:


So then, just as you received Christ Jesus as Lord, continue to live in him, rooted and built up in him, strengthened in the faith as you were taught, and overflowing with thankfulness.

I remember when I asked you why you wanted thankfulness to be your theme, you immediately rattled off a list!

1.  Because we've been saved by the grace of Christ, through faith.  We have the promise of forgiveness and eternal life.

3.  Because we've been given a wonderful church, wonderful friends, and wonderful families.

4.  Because we have so many physical, material blessings... our health, house, cars, jobs.  We're given unexpected, undeserved blessings from every direction.

You then went on to wonder if maybe you use the word "thankfulness" too much!

1st
The Apostle Paul begins almost every single one of his letters with thankfulness.  In fact, in Colossians (the epistle you chose), thankfulness appears at the key parts of every single chapter.

But he wins a hearing for himself by doing so in the enveloping context of genuine, heart-felt thankfulness.

But problems can be dealt with, hard things can be lovingly said, and controversies can be resolved... if you win a hearing with one another... in the enveloping context of genuine, heart-felt thankfulness.

2nd
It's absolutely a wonderful and happy thing that you are intentionally beginning your marriage on a note of great thankfulness!

But... the fact is... thankfulness won't always feel so natural to you.  Why?  Because the raging self-love that's now so "natural" to the fallen, unruly children of Adam and Eve will at times push you to be diametrically opposed to a generous, other-praising spirit of thankfulness.

That's exactly why Paul, in these epistles, is always calling and commanding Christians to thankfulness!  Because it's not always "natural" to us.  He's commanding to our weakness.

Realize that in the marriage relationship, you will have extraordinary power over one another.  With just a few words, a few sentences of love and appreciation and celebration of the other, you can LIFT UP your husband or your wife, like no one else can!

But... husbands and wives don't always choose to use that power.  Sadly, we often choose to do just the opposite.  Why?  Again, because of that raging self-love that we just mentioned.

If you'll recall, in our pre-marital counseling conversation, I mentioned to you the top five areas of marital problems:  finances, bedroom, in-laws, children, & communication.  But, do you remember what we said was at the core of all of those problems?  Selfishness.  Self-love.

A key to a happy, holy, strong marriage—full of love and loyalty— is generous appreciation and acknowledgement of the other person... warmly & regularly expressed.

It's difficult to stay sideways with someone who is always expressing thankfulness for you!

3rd
Note that whenever Paul mentions thankfulness, the heart of what he's thankful for is not the Colossians or the Ephesians or the Philippians themselves so much... but it's what Christ has accomplished for and through his people.

So, give thanks to him first of all.  Let your thankfulness always start there.  With Christ himself.  With the Giver, and not merely the gifts.

In Colossians (and the other letters of Paul), the conversation is serious!  He gives warnings and exhortations and discusses hard things—things that require you to THINK (not just things that are "easy")... and he does it all with the authoritative word of Christ.

In marriage, the conversation is often serious!  Warnings, exhortations, hard things—things that require you to think (not just easy things)... and Christians must do all of this with the authoritative word of Christ.

But—the intention is that this whole conversation of marriage should always be resting on a foundation of thankfulness.  Not just thankfulness for one another.  But sincere, deep, true thankfulness for what Christ has already done for his people in the work of the gospel.

Remember this: the heart of the gospel is not your work.  It's Christ's work.

So then, just as you received Christ Jesus as Lord, continue to live in him, rooted and built up in him, strengthened in the faith as you were taught, and overflowing with thankfulness.