The Shadow of Gospel Wings 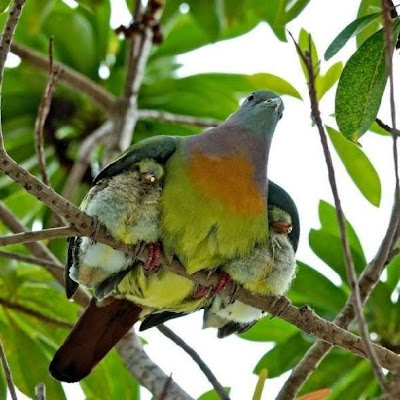 "Like an eagle that stirs up its nest, that flutters over its young, spreading out its wings, catching them, bearing them on its pinions, the Lord alone guided him..."
Deuteronomy 32


"Hide me in the shadow of your wings, from the wicked who do me violence, my deadly enemies who surround me..."
Psalm 17


"How precious is your steadfast love, O God! The children of mankind take refuge in the shadow of your wings..."
Psalm 36


"He will cover you with his pinions, and under his wings you will find refuge..."
Psalm 91

This beautiful picture is one of the most consistent metaphors that the Lord God uses when describing his care for his children.

Now... with that in mind... look at the words of your Savior, addressed to "church members" who were stuck in the emptiness of dead religion:

"How often would I have gathered your children together as a hen gathers her brood under her wings, and you were not willing!"
Matthew 23

The image may not seem especially powerful to those of us who are lacking in experience with hens and their broods, but it's an unforgettable image to farming families (especially of the past) who have experienced this:

A fire has swept through the farmyard and the hencoop.  Then next day you're cleaning everything up, preparing to rebuild what the fire destroyed.

You see a dead hen on the ground; the hen's body has been scorched and blackened by the fire.

You pick up the charred remains of the hen, preparing to dispose of it—and that's when you find living chicks underneath.  The mother hen had gathered and sheltered her chicks under her wings, and then remained unthinkably still while the fire raged over her.

The mother hen literally gave her life to protect and save her children.

(The same kind of thing was discovered with different kinds of birds after the Yellowstone fires of 1988, by the way.)

It's a very vivid, very violent image of what Jesus said he longed to do for his people.  And it's actually one of the strongest statements in the whole Bible, describing what Jesus' death was all about.

Jesus welcomes you to take refuge under his wings.

His remaining still on the cross is the unthinkable fulfillment of all the "taking refuge under the shadow of your wings" language that we find throughout the Bible.

Welcome to the crucified love of your God.

Email ThisBlogThis!Share to TwitterShare to FacebookShare to Pinterest
Labels: Creation, Loving the Bible, The Gospel, The Psalter