"I would say there are two kinds of doubts: dishonest doubts and honest doubts. Dishonest doubts are both proud and cowardly; they show disdain and laziness. A dishonest doubt is to say, ‘What a crazy idea!’ and then just walk away. ‘That’s impossible’ (or its more contemporary version, ‘That’s stupid’) is an assertion, not an argument. It’s a way of getting out of the hard work of thinking. But by contrast, honest doubts are humble, because they lead you to ask questions, not just put up a wall. And when you ask a real question, it makes you somewhat vulnerable. Mary’s question to the angel actually asks for information and leaves her open to the possibility of a good answer that would cause her to shift her views. Honest doubts, then, are open to belief. If you are really asking for information and good arguments, you might get some."

Outline:
The Reverse Judas
A Servant of Jesus Christ
And A Brother of James 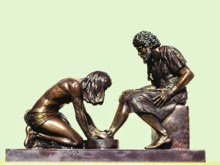