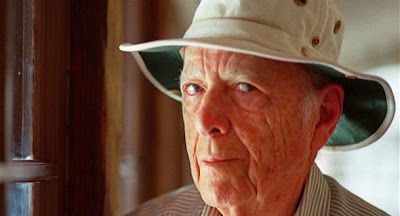 One of the most intelligent men I knew during my 15 years in St. Louis once told me this: "Almost everything I know about World War II, I learned from reading Herman Wouk's books, The Winds of War and War and Remembrance."

I found this almost impossible to believe, because I had heard this friend speak about the events and timeline and personalities of World War II in some wonderfully vivid detail.  So, I informed him that he was lying.  There you go.  I win.  Busted.

He then gave me his copy of The Winds of War.  I'm reading it for the second time now.

Herman Wouk is one of the most gifted and interesting authors that God, in his common grace, ever gave humanity.  And Wouk's attention to historical research is extraordinary.

I'm praying today that the God of whom you wrote in your book This Is My God (the God of Judaism) might yet be known to you as the God who revealed himself to us in human skin, as Jesus of Nazareth.

Reader, click HERE if you'd like to see a brief introduction to Wouk's work.  It's an article from The Atlantic, "The Great War Novelist America Forgot."

"One can detract from Wouk by saying there’s more to the story than he tells. Yet the story he tells is story enough. Give Wouk’s books to someone who knows little of the Second World War, and when they finish, they will feel almost as if they had lived through it. The novels are a monument as polished and fitting as all the marble slabs and columns erected since 1945—and vastly more eloquent and informative. The writer who created them deserves better remembrance and more honor in the literature of the country he loves so well."