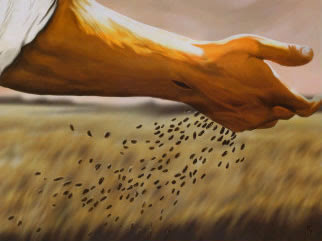 The Sower will be sowing His Word
this Sunday
at Decatur Presbyterian Church
10:45 am
2306 Modaus Rd, SW
Decatur, AL

And when a great crowd was gathering and people from town after town came to him, he said in a parable, “A sower went out to sow his seed. And as he sowed, some fell along the path and was trampled underfoot, and the birds of the air devoured it. And some fell on the rock, and as it grew up, it withered away, because it had no moisture. And some fell among thorns, and the thorns grew up with it and choked it. And some fell into good soil and grew and yielded a hundredfold.”

As he said these things, he called out, “He who has ears to hear, let him hear.”